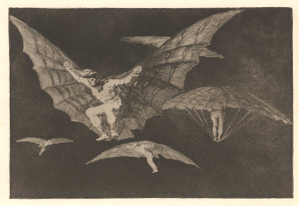 Goya created his final and most enigmatic print series in the years between 1815 and 1824. For reasons that remain unclear, 40 years passed before their publication in 1864. The series was published under the title Los Proverbios, although Goya's own captions for the working proofs include the word "disparates," meaning "follies." As a result, this print series is known by both titles. The proverbs assigned to each plate were added upon publication. Even with titles, the meanings of Los Proverbios remain ambiguous. Like Goya's "black" paintings, begun in 1819 after his recovery from a serious illness and filled with macabre visions, Los Proverbios are imbued with an overwhelming sense of pessimism and appear to reflect Goya's precarious mental state at the time. Each of the 18 etchings depicts isolated figures in dark, often nightmarish landscapes. While some plates appear harmlessly satirical, others depict gruesome monsters or attacks on innocents. Although the subject matter in this series is varied, the level of quality is constant. Goya's expert use of contour, line density, and tonal variation in weaving his dark visions clearly evidence his extraordinary abilities as a master printmaker.

Los Disparates, 1st edition, plate 8, Los ensacados / So el sayal, hay al (Men in sacks / There is something beneath the sackcloth)

Los Disparates, 1st edition, plate 17, La lealtad / El que no te ama, burlando te difama (A man mocked / He who doesn't like you will defame you in jest)