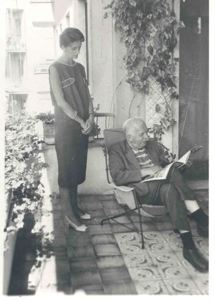 Mirella Bentivoglio was a writer, visual poet, sculptor, performance artist, and curator born in Klagenfurt, Austria. Throughout her childhood, she studied in Milan, Switzerland, and England, and this multilingual education served as a major influence on her work. Bentivoglio published her first book of poetry, Giardino, in 1943. She felt that it adhered too rigidly to syntactical rules, and waited 25 years before releasing her second book of poetry, Calendario, in 1968. During the intervening period, Bentivoglio established herself as a prominent poet and art critic, writing for Italian art journals. In the late 1960s, Bentivoglio gained recognition as one of the leading artists of the concrete poetry and visual poetry movements in Italy. Her work expressed linguistic elements and words visually, particularly involving the letters O and E. In her oeuvre, O represented the origin or the womb, while E represented the dynamics of worldly relationships. In the 1970s, Bentivoglio turned increasingly to the production of symbolic sculptures, in which the letters O and E took the forms of an egg and a book, respectively. In addition to three books of poetry, Bentivoglio authored an anthology of art criticism and a collection of short stories. She exhibited her own artwork and curated exhibitions of work by other women artists around the world. She is in the collections of the National Museum of Women in the Arts, Washington, DC; the University of Buffalo, NY; and the Benton Museum of Art at Pomona College.

Eclipse (from symbol to sign) (Eclissi [da simbolo a segno])

Homage to Shahn (Omaggio a Shahn)

Tombstone to Painting (Lapide all pintura)

The Present - a line in plan

The Play of Poetry (POEM)

A leaf in a leaf - a pregnant leaf

The Black Hole (a world of words)

Eclipse (from symbol to sign) (Eclissi [da simbolo a segno])

Semiotic Analysis: The Spell for Not Thinking (The Halo of the Woman is Her Condemnation) [Analisi semiotica: La fattura per non pensare (La raggiera della donna Ã¨ la sua condanna)]

I Object to Being an Object

The Face and the Name: The Mask and Its Strings (Il Volta e Il Nome: La Maschea e i suoi)

Flowers in the Tangle ("Poetry")

Synonymous (the grasshopper is made of grass)

Anthology of Essays on Swift's Gulliver

Project for a Large Sculpture ("E")

Project for a Large Structure

I object to being an object

Semiotic Analysis: The Spell for Not Thinking (the Halo of the Woman is her Condemnation) [Analisi semiotica: La fattura per non pensare (la raggiera della donna e la sua condanna)]

The Madonna of the Absence (La Madonna dell'assenza)

From Egg to Zero (Da uovo a zero)

From H to E, From Silent Letter to Word Conjunction (Da 'H' a 'E', da lettera muta a parola-congiunzione)

A line in plan

The Fruits of our Sea (l frutti del mare nostrum)

Your current search criteria is: Artist is "Mirella Bentivoglio".