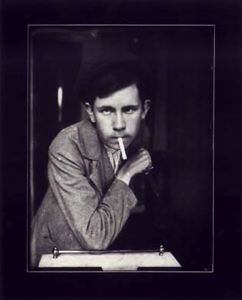 Co-founder, with JaromÃ­r Funke, of the Czech Photographic Society, Prague, 1924. He was trained as a bookbinder, and took up photography as an amateur. As a conscript in WWI he was wounded and lost his hand. He later studied with Karel NovÃ¡k at the State School of Graphic Art 1922 to 1924. From 1928 until his death he worked in the same wooden studio building in Prague, itself becoming a subject of many of his photographs. Early in his career he did advertising work, portraiture, and landscapes. From 1940 he stopped making enlargements and made only contact prints from large negatives. He lived in seclusion from the beginning of World War II, and concentrated on still lifes. He received the Czech government artists of merit award in 1961.

Portrait of a man

Interior of dining area with paintings and chaise lounge

Your current search criteria is: Artist is "Josef Sudek".