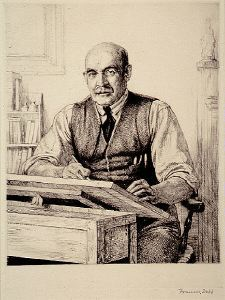 Sir Muirhead Bone is generally accepted as one of the greatest etchers of the twentieth century. Born in Glasgow, Scotland on March 23, 1876, he initially trained as an architect. He went against his parents' wishes to become an artist, taking night classes at the Glasgow School of Art and producing his first etchings in 1898. The turn of the century was momentous in Bone's life: he moved to London and had ten of his etchings published for the Glasgow Exhibition in 1901; his first exhibition took place at Carfax Gallery in 1902; and he married Gertrude Dodd in 1903. Bone had shifted from etching to drypoint in 1901, and ten more of his plates were published as a portfolio in 1904. In 1916, Bone was appointed as the first Official War Artist (and would be appointed again in 1940.) He produced drawings for the Allies on the Western Front, making no more drypoints until after the Armistice. In 1923, he sailed to America. Coincidentally, Joseph Conrad was on the same ship, and Bone executed three portraits of the author during the crossing. Bone built a considerable reputation between the world wars, exhibiting frequently in London and New York. He also illustrated several books during the 1920s. By 1939, the print market was declining, and Bone made his last drypoint.

Your current search criteria is: Artist is "Muirhead Bone".