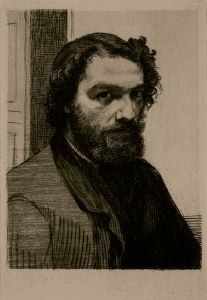 Alphonse Legros was a painter, etcher, and sculptor, now remembered chiefly for his graphics on macabre and fantastic themes. An excellent draftsman, he taught in London, revitalizing British drawing and printmaking during a period of low ebb. [Encyclopaedia Britannica, 1994] After a penurious youth, when he studied under Lecoq de Boisbaudran, he had some considerable success at the Salon, and several of his works were bought by the state. In 1863, however, he participated in the Salon des RefusÃ©s, partly under the influence of his friend Whistler. He came to London in the same year and taught first at the South Kensington School of Fine Art and then at the Slade, where he exerted a great influence on those artists who were to become the nucleus of the New English Art Club. Although he could in no way be thought of as an Impressionist, on the invitation of Degas he participated in the second Impressionist exhibition and was an invaluable contact between Paris and London in the dissemination of Impressionist ideas. Pissarro was very dubious about his teaching methods, especially when Lucien, his son, was working under him. Legros' own paintings were rather sentimental genre scenes (The Angelus, 1859; MusÃ©e d'Orsay).

Your current search criteria is: Artist is "Alphonse Legros".