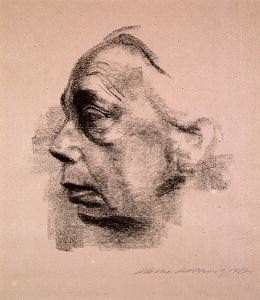 KÃ¤the Kollwitz was a German graphic artist and poet best known for her portrayals of the struggles of the working class and the horrors of war. She was a major contributor to the late-nineteenth-century Realist and early-twentieth-century Expressionist eras, and she experimented with an array of media, including painting, printmaking, and sculpture. Kollwitz was born to a middle-class family headed by the left-wing activists Karl Schmidt and Katherina Schmidt, in the Prussian city of KÃ¶nigsberg. Noticing her early artistic talents and keen to promote womenâs cultural empowerment, her parents encouraged her to take drawing lessons from local artist Rudolf Mauer in 1881. Between 1884 and 1890, Kollwitz studied etching with Max Klinger, in Berlin, and painting with Munich artist Ludwig Herterich. In 1891, she married the doctor Karl Kollwitz; the couple lived in Berlin and had two childrenâHans and Peter. She was a committed socialist and pacifist, and she consolidated her skills and her passion for social activism in her first popular etching series, Ein Weberaufstand (March of the Weavers), which was displayed at the 1898 Great Berlin Art Exhibition. In October 1914, her son Peter died on the battlefield during World War I. Although she continued to create dramatic lithographs of contemporary events, including the 1917 Russian Revolution and the 1918 German Revolution, she devoted much of the next two decades to writing poetry on the destruction of war and sculpting a figurative granite memorial titled The Grieving Parents (1932). In 1933, Kollwitzâs career as the first woman to be named an honorary professor at the Prussian Academy of Arts was terminated by the Nazi Party, and she was banned from exhibiting. Throughout World War II, she experienced personal tragedies, including the death of her husband in 1940, the death of her grandson in the war in 1942, and the bombing of her studio in 1943. She died at the age of 77, sixteen days before the end of the war.

The Call of Death