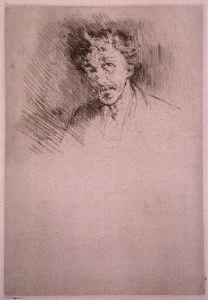 Regarded as one of the finest etchers since Rembrandt, James A.M. Whistler played a major role in both American and British nineteenth-century art. Born in Lowell, Massachusetts on July 11, 1834, Whistler moved with his family to St. Petersburg, Russia in 1843, where he studied at the Imperial Academy of Science. After moving back to the United States, Whistler learned to etch while working for the U.S. Coast and Geodetic Survey in Washington DC. He returned to Europe at age 21, studying at the Ecole ImpÃ©riale et SpÃ©ciale de Dessin in Paris. Whistler settled in London in 1859 and remained there for most of his life. Whistlerâs work saw many influences, from masters such as Rembrandt van Rijn and Diego Velasquez to contemporaries like Edouard Manet and Gustave Courbet. He was, in turn, remarkably influential to others. His followers included the young artists known as the "Duveneck Boys." His incorporation of Japanese art into his own work led to the rise of "Japonisme" in artistic circles of the day; his decorative work anticipated Art Nouveau; and he encouraged artists toward harmony within works, using titles like âNotesâ and âSymphonyâ to reflect his musical analogy. As an outspoken proponent of "Art for Artâs Sake," Whistler abandoned contemporary notions of acceptable subjects, turning to warehouses and the industrialized river in the âThames Setâ (1859-61), farmyards and peasants in the âFrench Setâ (1858), and ephemeral effects of the night sky in his âNocturnes.â This innovation was not universally appealing; Whistler sued critic John Ruskin for slander after his review of an 1877 exhibition. He won only a farthing in damages and was bankrupted by court costs. Whistler v. Ruskin was not the only controversy in Whistlerâs life. He had a falling out with his brother-in-law, the artist Sir Francis Seymour Haden; the animosity never subsided. Whistler was elected President of the Society of British Artists in 1886, but was forced out in 1888. He took his friends with him, quipping that "the âArtistsâ have come out, and the âBritishâ remain." He employed this acerbic wit in pamphlets and his famous "Ten Oâclock Lecture" of 1885, attacking current demands for the imitation of nature in art. Whistler was a prolific artist, creating almost 3000 oils, watercolors, drawings, and graphic works, many of them being portraits and land/seascapes. Whistler was also a gifted designer, producing book covers, furniture, and interiors, most notably his âPeacock Roomâ for F.R. Leland (1876-7). He exhibited constantly from 1860 onward: four shows at the Royal Academy London in the 1860s; exhibits with the Impressionists at the Salon de RefusÃ©s in 1863 and two more before Les XX in Brussels in 1884; the French Salons of 1882 and 1885 and the Exhibition Universelle in Paris in 1867; his first one-man show at the Flemish Gallery, London in 1874; shows in New York during the 1860s; an 1880 exhibition at the Society of Fine arts of his "Venice" commission; and a major retrospective in 1892. Whistler was elected President of the International Society of Sculptors, Painters and Gravers in 1898, and was honored with a Doctor of Law degree from Glasgow University in 1903. James A.M. Whistler died in London on July 17, 1903. The Whistler Memorial Exhibition was held for him in Paris in 1905. His art has been displayed, and his influence felt, throughout the twentieth century.

Whistler with the White Lock

Your current search criteria is: Bibliography is "Beyond Appearance: Constructing Likeness".