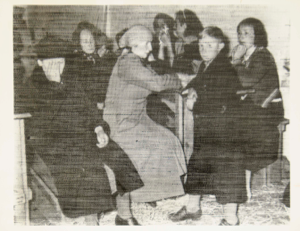 Commentary
A pathetic scene showing weeping Sudeten women at the German border. In the event that the Czech crisis flares into open warefare, they will probably lose their homes and belongings. Meanwhile, a period of âwatchful waitingâ continues. British Prime Minister Neville Chamberlain told King George VI that Hitler demands âimmediate surrenderâ of most of Czechoslovakiaâs Sudeten border areas. It was learned from a high authority that the Prime Minister also told the king that Britain must agree to any deal so long as war is averted. Eger, Czechoslovakia, September 1938.
Materials
Wire photographs were originally transmitted over phonelines, then later, by satellite. They were first used in the early 1920s. Associated Press became a leader with this. After pigment touch-ups, etc., the print is put into a drum (like a drum scanner). The image gets converted into audio tones that are transmitted. The tones are received and beamed onto photo-sensitive paper. Wire photographs are copies without originals---they are hybrid, transmitted objects. (Britt Salvesen, Curator and Department Head, Photography Department, Los Angeles County Museum of Art, March 30-31, 2022)
Keywords Click a term to view the records with the same keyword
This object has the following keywords:
Adolf Hitler, Crying, European Theater, Female Figures, German border, Grief, Neville Chamberlain, Sudenten Crisis, Sudenten German, World War II
Additional Images Click an image to view a larger version

Your current search criteria is: Keyword is "EAS".