Reies Tijerina, leader of the Mexican-American group of the Poor People's Campaign, addresses demonstrators outside the Supreme Court 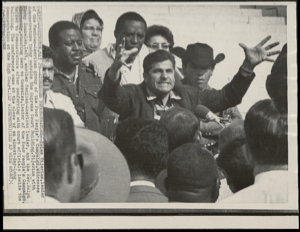 Reies Tijerina, leader of the Mexican-American group of the Poor People's Campaign, addresses demonstrators outside the Supreme Court, May 29, 1968
Vintage wire photograph on paper
in. (cm)

Commentary
Addresses Demonstrators: Reies Tijerina, leader of the Mexican-American group of the Poor People's Campaign, addresses demonstrators today outside the Supreme Court. Tijerina is with Corky Gonzales (left), another Mexican-American leader, and Reverend Ralph Abernathy, standing next to Gonzales, leader of the Poor People's Campaign. They talked to demonstrators after conferring with court officials inside the building. The conference came at the close of an almost-day-long demonstration at the High Court, Washington DC.

Reies Lopez Tijerina (1926-2015), an activist who led a struggle in the 1960s and 1970s to restore New Mexican land grants to the descendants of their Spanish colonial and Mexican owners. As a vocal spokesman for the rights of Hispanos and Mexican Americans, he became a major figure of the early Chicano Movement (although he preferred "Indohispano" as a name for his people) and founded the Alianza Federal de Mercedes. As an activist, he worked in community education and organization, media relations, and land reclamations. He became famous and infamous internationally for his 1967 armed raid on the Tierra Amarilla courthouse. In March 1968, Tijerina was elected to lead the Chicano contingent of the Washington DC march of the Poor People's Campaign. They conducted the march on May 2, 1968, as planned. Tijerina, with three busloads from New Mexico, met up with the other Hispanic contingencies from Colorado, led by Corky Gonzales, and the Los Angeles, led by Alicia Escalante, Reverend Nieto of Texas, and Puerto Ricans from New York. Together, they convened in "Resurrection City" with the black factions led by Coretta Scott King and Ralph Abernathy. Tijerina insisted that the Native American delegations spearhead the march and be the first to demand justice, a proposal that had been approved during the original planning meeting with Dr. King. But when it came time to march, Abernathy's followers resisted the idea. Much was made of this "rift" in the mainstream press, which claimed that Tijerina insisted that the Hispanic delegation go first. En route to DC, a group of Native Americans who were accompanied by Dick Gregory were detained by Washington State police. In protest, Tijerina organized a demonstration in front of the United States Supreme Court building on May 29. Police brutalized the demonstrators, but eventually, twenty delegates were permitted to meet with John Davis, the clerk of the court. The following month, leaders met with Secretary of State Dean Rusk. On June 23, 1969, the day that Warren E. Burger was sworn in as Chief Justice, Tijerina returned to Washington to place him under citizen's arrest. As he waited outside the Senate chamber, Burger never exited. He had dodged the arrest by exiting out a back door. Supporters of Tijerina formed the People's Constitutional Party in 1968.

Rodolfo "Corky" Gonzales (1928-2005) was a Chicano boxer, poet, and political organizer and activist. Gonzales was one of many leaders for the Crusade for Justice in Denver, Colorado. The Crusade for Justice was noted for being an urban rights and Chicano cultural urban movement during the 1960s focusing on social, political and economic justice for Chicanos. Gonzalez convened the first-ever Chicano Youth Liberation Conference in 1968, which was poorly attended due to timing and weather conditions. Gonzales tried again in March 1969, and established what is commonly known as the First Chicano Youth Liberation Conference. This Conference was attended by many future Chicano activists and artists. The conference also birthed the Plan Espiritual de AztlÃ¡n, a pro-indigenist manifesto advocating revolutionary Chicano nationalism and self-determination for all Chicanos. Through the Crusade for Justice, Gonzalez organized the Mexican American people of Denver to fight for their cultural, political, and economic rights, leaving his mark on Chicano History.
Bibliography
Associated Press ID #19045582184826
Marks
On recto: typewritten title and date.
On verso: date stamp.
Materials
Wire photographs were originally transmitted over phonelines, then later, by satellite. They were first used in the early 1920s. Associated Press became a leader with this. After pigment touch-ups, etc., the print is put into a drum (like a drum scanner). The image gets converted into audio tones that are transmitted. The tones are received and beamed onto photo-sensitive paper. Wire photographs are copies without originals---they are hybrid, transmitted objects. (Britt Salvesen, Curator and Department Head, Photography Department, Los Angeles County Museum of Art, March 30-31, 2022)
Keywords Click a term to view the records with the same keyword
This object has the following keywords:
Civil Rights Movements, Corky Gonzales, Injustice, Male Portraits, Mexican American, Poor People's Campaign, Poor People's Campaign, Poverty, Protesters, Racial Discrimination, Reies Lopez Tijerina, Reverend Ralph Abernathy, Southern Christian Leadership Conference, Speeches, U.S. Supreme Court, Washington DC
Additional Images Click an image to view a larger version

Your current search criteria is: Object is "Reies Tijerina, leader of the Mexican-American group of the Poor People's Campaign, addresses demonstrators outside the Supreme Court".