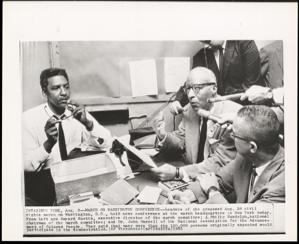 Commentary
March on Washington Conference: Leaders of the proposed August 28 Civil Rights March on Washington DC hold a news conference at the march headquarters in New York today. From left are Bayard Rustin, Executive Director of the march committee; A. Philip Randolph, National Chairman of the march committee; and Dr. John Morsell of the NAACP. They said that many more than the 100,000 people originally expected would participate in the demonstration.

Bayard Rustin (1912-1987) was an American leader in social movements for Civil Rights, socialism, nonviolence, and gay rights. Rustin worked with A. Philip Randolph on the March on Washington Movement in 1941 to press for an end to discrimination in employment. Rustin later organized Freedom Rides and helped to organize the Southern Christian Leadership Conference to strengthen Martin Luther King, Jr.'s leadership. He taught King about nonviolence and later served as an organizer for the March on Washington for Jobs and Freedom. After the passage of the Civil Rights legislation of 1964â65, Rustin became the head of the AFLâCIO's A. Philip Randolph Institute, which promoted the integration of formerly all-white unions and promoted the unionization of blacks. During the 1970s and 1980s, Rustin served on many humanitarian missions, such as aiding refugees from Communist Vietnam and Cambodia. At the time of his death in 1987, he was on a humanitarian mission in Haiti. Rustin was a gay man who had been arrested early in his career for engaging in public sex. Due to criticism over his sexuality, he usually acted behind the scenes as an influential adviser to Civil Rights leaders. In the 1980s, Rustin became a public advocate on behalf of gay causes. Later in life, Rustin shifted ideologically towards neoconservatism. On November 20, 2013, President Barack Obama posthumously awarded Rustin the Presidential Medal of Freedom. A. Philip Randolph (1889 â 1979) was a leader in the Civil Rights Movement, the American labor movement, and socialist political parties. In 1925, he organized and led the Brotherhood of Sleeping Car Porters, the first predominantly black labor union. In the early Civil Rights Movement and the Labor Movement, Randolph was a voice that would not be silenced. His continuous agitation with the support of fellow labor rights activists against unfair labor practices in relation to people of color eventually led President Franklin D. Roosevelt to issue Executive Order 8802 in 1941, banning discrimination in the defense industries during World War II. The group then successfully pressured President Harry S. Truman to issue Executive Order 9981 in 1948, ending segregation in the armed services. In 1963, Randolph was the head of the March on Washington. He also inspired the "Freedom Budget", sometimes called the "Randolph Freedom budget", which aimed to deal with the economic problems facing the black community.
Bibliography
Associated Press ID #630803058
Marks
On recto: typewritten title and date.
On verso: manuscript title, date stamp and library stamp.
Materials
Wire photographs were originally transmitted over phonelines, then later, by satellite. They were first used in the early 1920s. Associated Press became a leader with this. After pigment touch-ups, etc., the print is put into a drum (like a drum scanner). The image gets converted into audio tones that are transmitted. The tones are received and beamed onto photo-sensitive paper. Wire photographs are copies without originals---they are hybrid, transmitted objects. (Britt Salvesen, Curator and Department Head, Photography Department, Los Angeles County Museum of Art, March 30-31, 2022)
Keywords Click a term to view the records with the same keyword
This object has the following keywords:
A. Philip Randolph, Bayard Rustin, Civil Rights Movements, Dr. John Morsell, Headquarters, Injustice, March on Washington August 1963, National Association for the Advancement of Colored People, New York, Press Conferences, Racial Discrimination
Additional Images Click an image to view a larger version

Your current search criteria is: Keyword is "CNI".