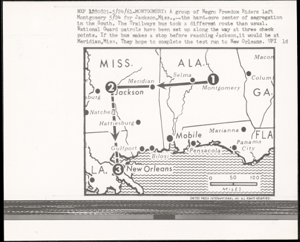 
A group of black Freedom Riders left Montgomery for Jackson, Mississippi. National Guard patrols have been set up along the way at three check points., May 24, 1961
Vintage wire photograph on paper

Commentary
A group of black Freedom Riders left Montgomery for Jackson, Mississippi-- the hardcore center of segregation in the South. The Trailways bus took a different route than usual. National Guard patrols have been set up along the way at three check points. If the bus makes a stop before reaching Jackson, it would be at Meridian, Mississippi. They hope to complete the test run to New Orleans.
Marks
On recto: typewritten title and date.
On verso: date stamp.
Materials
Wire photographs were originally transmitted over phonelines, then later, by satellite. They were first used in the early 1920s. Associated Press became a leader with this. After pigment touch-ups, etc., the print is put into a drum (like a drum scanner). The image gets converted into audio tones that are transmitted. The tones are received and beamed onto photo-sensitive paper. Wire photographs are copies without originals---they are hybrid, transmitted objects. (Britt Salvesen, Curator and Department Head, Photography Department, Los Angeles County Museum of Art, March 30-31, 2022)
Keywords Click a term to view the records with the same keyword
This object has the following keywords:
Buses, Civil Rights Movements, Freedom Riders, Injustice, Jackson, Maps, Montgomery, Racial Discrimination
Additional Images Click an image to view a larger version

Your current search criteria is: Keyword is "HJV".