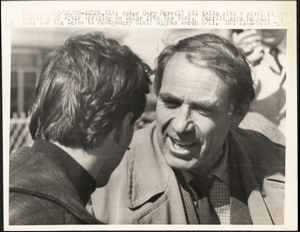 Commentary
Actor Gary Merrill (right) talks with a Civil Rights worker after arriving in Selma from New York. Merrill says he will be here for the Selma to Montgomery Civil Rights march happening on March 21, Alabama.

The Selma to Montgomery Marches were three protest marches held in 1965 along the 54-mile (87 km) highway from Selma, Alabama to the state capital of Montgomery. The marches were organized by nonviolent activists to demonstrate the desire of black citizens to exercise their constitutional right to vote, in defiance of segregationist repression. They were part of a broader voting rights movement underway in Selma and throughout the American South. By highlighting racial injustice, the marches contributed to passage that year of the Voting Rights Act, a landmark federal achievement of the Civil Rights Movement.
Marks
On recto: typewritten title and date.
On verso: United Press International Stamp.
Materials
Wire photographs were originally transmitted over phonelines, then later, by satellite. They were first used in the early 1920s. Associated Press became a leader with this. After pigment touch-ups, etc., the print is put into a drum (like a drum scanner). The image gets converted into audio tones that are transmitted. The tones are received and beamed onto photo-sensitive paper. Wire photographs are copies without originals---they are hybrid, transmitted objects. (Britt Salvesen, Curator and Department Head, Photography Department, Los Angeles County Museum of Art, March 30-31, 2022)
Keywords Click a term to view the records with the same keyword
This object has the following keywords:
Activists, Civil Rights Movements, Gary Merrill, Injustice, Male Portraits, Racial Discrimination, Selma, Selma to Montgomery March
Additional Images Click an image to view a larger version