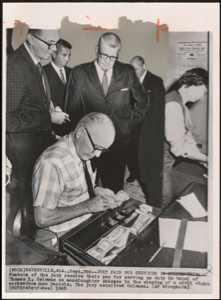 Jurors receive their pay for serving in the trial of Thomas L. Coleman in Hayneville, Alabama. They acquitted him in the slaying of Civil Rights worker Jonathan Daniels., September 1965
Vintage wire photograph on paper
8 7/8 x 7 in. (22.54 x 17.78 cm)

Commentary
Jury Paid For Services: Jurors receive their pay for serving in the trial of Thomas L. Coleman in Hayneville, Alabama. They acquitted him on manslaughter charges in the slaying of Civil Rights worker Jonathan Daniels.

Jonathan Daniels (1939-1965) was a 26-year-old white seminary student from New Hampshire who traveled to Lowndes County, Alabama to register blacks to vote. On August 20, 1965, Jonathan Daniels, Ruby Sales (then a 17-year-old black Civil Rights activist), Reverend Richard Morrisroe and Joyce Bailey left the Lowndes County jail after spending six days locked up with sixteen others following a protest. The four headed for Varner's Cash Store a few blocks away for soft drinks while they waited for a ride. "Bloody Lowndes," a nickname earned because of the county's often-violent suppression of blacks, was an especially dangerous place for activists. When Daniels' group got to the store, they were met at the door by Tom Coleman, a white 54-year-old highway engineer, with a 12-gauge shotgun in his hands. Coleman told them the store was closed. When Daniels asked whether he was threatening the group, Coleman fired. Daniels pushed Sales out of the way and was hit in the chest, dying instantly but saving Salesâ life. Coleman pulled the trigger again, hitting Morrisroe in the back and side as the priest tried to escape with Bailey. After a three-day trial, a jury of 12 white men took one hour and 31 minutes to acquit Coleman. The reaction was blistering. Elected officials, including Alabama's Attorney General, decried the trial as a sham and the verdict a travesty. Editorial pages in both Northern and Southern newspapers excoriated Lowndes County as a bastion of entrenched racism. Coleman, who had said that the churchmen had weapons and that he had killed them in self-defense, told CBS News a year later he had no regrets. The Civil Rights workers denied that the men were armed, no weapons were found, and at trial, defense witnesses gave changing accounts. The killing of Daniels and fellow Civil Rights activist Viola Liuzzo earlier the same year helped galvanize blacks in the county. More blacks registered to vote and within five years, the county elected its first black sheriff. By the end of the 1970s, county government was effectively controlled by blacks. In 1991, the Episcopal Church added Daniels to its roster of martyrs; it celebrates his life on August 14, the day of his arrest in Alabama.
Bibliography
Associated Press ID #3238289854
Marks
On recto: typewritten title and date.
On verso: manuscript title, date stamp and newspaper caption with date stamp affixed.
Materials
Wire photographs were originally transmitted over phonelines, then later, by satellite. They were first used in the early 1920s. Associated Press became a leader with this. After pigment touch-ups, etc., the print is put into a drum (like a drum scanner). The image gets converted into audio tones that are transmitted. The tones are received and beamed onto photo-sensitive paper. Wire photographs are copies without originals---they are hybrid, transmitted objects. (Britt Salvesen, Curator and Department Head, Photography Department, Los Angeles County Museum of Art, March 30-31, 2022)
Keywords Click a term to view the records with the same keyword
This object has the following keywords:
Acquittals, Activists, Civil Rights Movements, Death, Hate, Hate crimes, Hayneville, Injustice, Jonathan Daniels, Jurors, Murder, Racial Discrimination, Thomas Coleman, Trials, Voting Rights
Additional Images Click an image to view a larger version