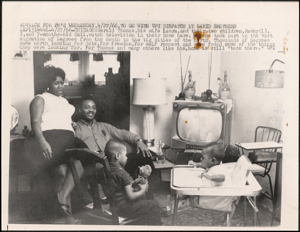 
Gerald Thomas, his wife Laura and their two children watch television in their Chicago home. They were part of the migration from the South to big cities in the North., April 27, 1966
Vintage wire photograph on paper

Commentary
Gerald Thomas, his wife Laura and their two children, 2-year-old Recky and 7-month-old Gail, watch television in their home in Chicago. Thomas took part in the vast migration of blacks from the South to the big cities of the North. Thousands of blacks came north looking for jobs, freedom, and self respect; some found some of the things they were looking for. But for Thomas and many others like him, home is still "back there."
Marks
On recto: typewritten title and date.
On verso: manuscript title and date, United Press International stamp and date stamp.
Materials
Wire photographs were originally transmitted over phonelines, then later, by satellite. They were first used in the early 1920s. Associated Press became a leader with this. After pigment touch-ups, etc., the print is put into a drum (like a drum scanner). The image gets converted into audio tones that are transmitted. The tones are received and beamed onto photo-sensitive paper. Wire photographs are copies without originals---they are hybrid, transmitted objects. (Britt Salvesen, Curator and Department Head, Photography Department, Los Angeles County Museum of Art, March 30-31, 2022)
Keywords Click a term to view the records with the same keyword
This object has the following keywords:
Black migration, Chicago, Civil Rights Movements, Gerald Thomas, Injustice, Laura Thomas, Parent and Child, Racial Discrimination, Televisions
Additional Images Click an image to view a larger version

Your current search criteria is: Keyword is "EFG".