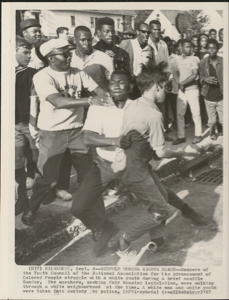 Members of the NAACP Youth Council have a brief scuffle with a white youth in Milwaukee. They were marching in a white neighborhood seeking fair housing legislation at the time., September 1967
Vintage wire photograph on paper

Commentary
Scuffle During Rights March: members of the Youth Council of the National Association for the Advancement of Colored People struggle with a white youth during a brief scuffle. The marchers, seeking fair housing legislation, were walking through a white neighborhood at the time. A white man and white youth were taken into custody by police, Milwaukee.
Marks
On recto: typewritten title and date.
On verso: manuscript title.
Materials
Wire photographs were originally transmitted over phonelines, then later, by satellite. They were first used in the early 1920s. Associated Press became a leader with this. After pigment touch-ups, etc., the print is put into a drum (like a drum scanner). The image gets converted into audio tones that are transmitted. The tones are received and beamed onto photo-sensitive paper. Wire photographs are copies without originals---they are hybrid, transmitted objects. (Britt Salvesen, Curator and Department Head, Photography Department, Los Angeles County Museum of Art, March 30-31, 2022)
Keywords Click a term to view the records with the same keyword
This object has the following keywords:
Activists, Arrest, Civil Rights Movements, Fair housing laws, Fighting, Housing, Injustice, Marches, Marches, Milwaukee, NAACP Youth Council, Police, Racial Discrimination, Street Scenes
Additional Images Click an image to view a larger version