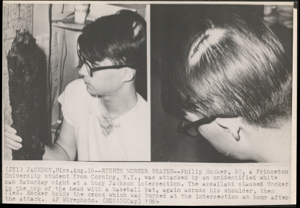 Princeton University student Philip Hocker was attacked by a white man at a busy Jackson intersection. He holds the cross that was burned at the intersection an hour after the attack., August 16, 1964
Vintage wire photograph on paper
5 5/8 x 8 1/16 in. (14.29 x 20.48 cm)

Commentary
Rights Worker Beaten: Philip Hocker, 20, a Princeton University student from Corning, New York, was attacked by an unidentified white man Saturday night at a busy Jackson intersection. The assailant slammed Hocker in the top of the head with a baseball bat and again across his shoulder, then he fled. Hocket holds the cross that was burned at the intersection an hour after the attack, Mississippi.
Marks
On recto: typewritten title and date.
On verso: manuscript title.
Materials
Wire photographs were originally transmitted over phonelines, then later, by satellite. They were first used in the early 1920s. Associated Press became a leader with this. After pigment touch-ups, etc., the print is put into a drum (like a drum scanner). The image gets converted into audio tones that are transmitted. The tones are received and beamed onto photo-sensitive paper. Wire photographs are copies without originals---they are hybrid, transmitted objects. (Britt Salvesen, Curator and Department Head, Photography Department, Los Angeles County Museum of Art, March 30-31, 2022)
Keywords Click a term to view the records with the same keyword
This object has the following keywords:
Activists, Assaults, Civil Rights Movements, Cross burning, Injustice, Jackson, Philip Hocker, Princeton University, Racial Discrimination
Dimensions