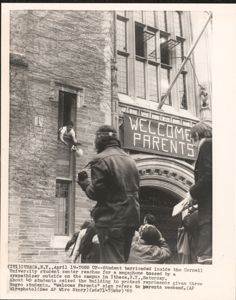 A student barricaded inside the student center at Cornell University in Ithaca, New York reaches for a megaphone tossed by a sympathizer outside, April 19, 1969 (printed later)
Wire photograph on paper

Commentary
Toss Up: A student barricaded inside the student center at Cornell University in Ithaca, New York reaches for a megaphone tossed by a sympathizer outside. About 40 students seized the building to protest reprimands given to three black students.

In the mid 1960s, Cornell University in Ithaca, New York began a program to encourage admission of black students under the leadership of University President James Perkins. Some of the newly-admitted students encountered racial slurs and racist incidents, including a cross burning. The black students responded with several campus demonstrations in protest. Escalating their protests, black students took over Straight Hall, the student union, on the Friday of Parentâs Day Weekend, April 18,1969. They evicted parents and other students. After their takeover, the black students were attacked in a fist fight by fraternity students. To defend themselves, they secretly brought rifles and shotguns into Straight Hall. Fearing an armed confrontation, university administrators began intense negotiations to end the takeover peacefully. On Sunday afternoon the black students accepted an amnesty agreement and agreed to retreat from the building with their weapons. As the Associated Press staff photographer covering upstate New York, I was at the doorway taking pictures when the students exitted. In the Pulitzer picture, Eric Evans (center) carries a shotgun and Ed Whitfield (right) carries a rifle. The next morning, this picture was on the front page of nearly every newspaper in the United States. The picture raised fears that nationwide student protests over racism and the Vietnam War would escalate into armed conflict and deaths.
Marks
On recto: typewritten title and date.
On verso: manuscript title.
Materials
Wire photographs were originally transmitted over phonelines, then later, by satellite. They were first used in the early 1920s. Associated Press became a leader with this. After pigment touch-ups, etc., the print is put into a drum (like a drum scanner). The image gets converted into audio tones that are transmitted. The tones are received and beamed onto photo-sensitive paper. Wire photographs are copies without originals---they are hybrid, transmitted objects. (Britt Salvesen, Curator and Department Head, Photography Department, Los Angeles County Museum of Art, March 30-31, 2022)
Keywords Click a term to view the records with the same keyword
This object has the following keywords:
Activists, Building takeovers, Civil Rights Movements, Ed Whitfield, Eric Evans, Injustice, Ithaca, Megaphones, Protesters, Pulitzer Prize, Punishment, Racial Discrimination, Straight Hall, Student unions
Additional Images Click an image to view a larger version