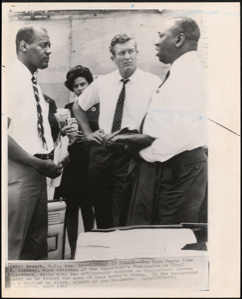 Commentary
Lindsay in Newark: New York Mayor John V. Lindsay, Vice Chairman of the President's Commission on Civil Disorders, talks with two antipoverty workers on Springfield Avenue today as he toured the area of last month's riots. In the background is a boarded-up store, victim of the violence.

The 1967 Newark Riot was one of 159 race riots that swept cities in the United States during the "Long Hot Summer of 1967." It occurred in Newark, New Jersey from July 12 - July 17. Over the four days of rioting, looting, and property destruction, 26 people died and hundreds were injured.
Marks
On recto: typewritten title and date.
Materials
Wire photographs were originally transmitted over phonelines, then later, by satellite. They were first used in the early 1920s. Associated Press became a leader with this. After pigment touch-ups, etc., the print is put into a drum (like a drum scanner). The image gets converted into audio tones that are transmitted. The tones are received and beamed onto photo-sensitive paper. Wire photographs are copies without originals---they are hybrid, transmitted objects. (Britt Salvesen, Curator and Department Head, Photography Department, Los Angeles County Museum of Art, March 30-31, 2022)
Keywords Click a term to view the records with the same keyword
This object has the following keywords:
1967 Newark Riot, Activists, Civil Rights Movements, Injustice, John Lindsay, Poverty, Racial Discrimination, Reviews, Springfield Ave., Stores
Additional Images Click an image to view a larger version