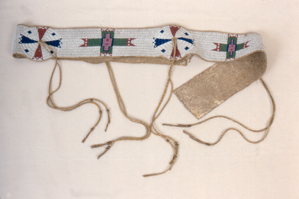 Materials
glass beads and leather
Commentary
In the latter half of the 19th century, narrow beaded strips were often placed on the blackets worn by Plains peoples. It placed horizontally across the back and arms. The prototype of this garment can be found in earlier hide robes, whose central seam was produced when a hide, split for eaiser handling during the tanning process, was rejoined and the sesam covered with a quilled strip. This beaded strip reflects a traditional quillwork design, in which four segmented discs are balanced by horizontal elements.
-from the Native American Art from the Permanent Collection catalog, 1979
Bibliography
Kay Koeninger and Joanne M. Mack, "Native American Art from the Permanent Collection" (Claremont: Galleries of the Claremont Colleges, 1979), 73 (illustrated/bw) fig. 240.
Keywords Click a term to view the records with the same keyword
This object has the following keywords:
Beadwork
Exhibition List
This object was included in the following exhibitions:
Dimensions
Bibliography List
This object has the following bibliographic references:
Portfolio List Click a portfolio name to view all the objects in that portfolio
This object is a member of the following portfolios:

Your current search criteria is: Portfolio is "Plains Culture" and [Object]Display Artist is "Sioux Artist" and [Object]Object Type is "Textiles".