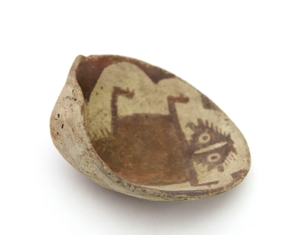 Materials
clay, slip and paint
Commentary
The shell, with its connotation of water, was particularly prized by the desert-dwelling Hohokam. Shell carving became a well developed art form as they were able to obtain many types of shells from the Gulf of California. Shell forms were even interpreted in other media The animal depicted on the interior of this shell-shaped scoop is a lizard.
-from the Native American Art from the Permanent Collection catalog, 1979
Bibliography
Kay Koeninger and Joanne M. Mack, "Native American Art from the Permanent Collection" (Claremont: Galleries of the Claremont Colleges, 1979), 62, fig. 172.
Keywords Click a term to view the records with the same keyword
This object has the following keywords:
Bowls, Effigies, Lizards, Pottery, Seashells
Bibliography List
This object has the following bibliographic references:
Portfolio List Click a portfolio name to view all the objects in that portfolio
This object is a member of the following portfolios:

Your current search criteria is: Object is "Bowl: Shell Effigy with Lizard".