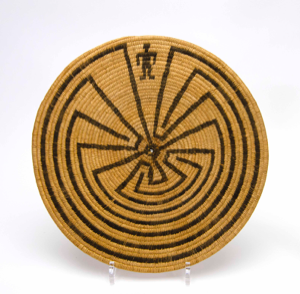 Materials
cattail, willow sapwood and devil's claw
Bibliography
Kay Koeninger and Joanne M. Mack, "Native American Art from the Permanent Collection" (Claremont: Galleries of the Claremont Colleges, 1979), 38-39 (illustrated/bw 38) fig. 89.
See J. Frederick, 'Indian Art in America,' plate 162, Greenwich, Conn., 1962.
Refer to 'Indian Art in America,' plate 162, by Frederick J. Dockstader regarding maze design.
Commentary
Like the Hopi, the Pima employed trays for serving food. The maze design, a relatively recent one for Pima basketmakers, may represent the trail to Siuhu, and may have been inspired by a drawing on the wall of Casa Grande, Arizona, an ancient Hohokam ruin.
-from the Native American Art from the Permanent Collection catalog, 1976

Your current search criteria is: Portfolio is "Pima Culture" and [Object]Century is "20th c".