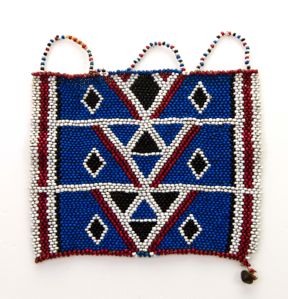 Materials
glass beads without backing
Bibliography
Photographed by R.K. Liu for "The Bead Journal," 11/15/76.
Technique
"Single bead netting very similar to Peyote stitch, except done with several threads. On the long portion these were attached to the side with the loop over a heavy fiber foundation and on the square piece at the plain end. The other side of the long piece was finished with 2 rows of extra beads on both sides, making it thicker than the main body of the piece. This is also true of the loop-side of the larger rectangular piece (on which they used only 1 row of this double work.)"
Attribution
See R. Conn report (1978).
Commentary
This breast ornament incorporates the larger, irregular beads, which were the first type traded to Native Americans in the early 19th century. Such beads were carried in packs on horses to remote regions, earning them the name "pony beads." The colors--blue, read, white and black--were sacred within Native traditions, frequently used in quillwork and easily adapted to traditional designs. Later traders brought smaller, more regular beads, in a greater range of colors. These "seed" beads became the dominant form used in beadwork.
Keywords Click a term to view the records with the same keyword
This object has the following keywords:
Beadwork, Geometric motifs
Additional Images Click an image to view a larger version

Your current search criteria is: Portfolio is "Edgar Heap of Birds, Spring 2013" and [Object]Object Type is "Clothing" and [Object]Display Artist is "Native American Artist".