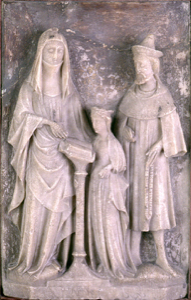 Commentary
This relief depicts the Virgin Mary as a child, being taught to read by her parents. Mary, crowned, reads from a book on a lectern while her parents stand to either side. Saint Anne, her mother, is to her left, gesturing toward the page; her father, Joachim, stands to her right, holding a rosary in his left hand. Stylistically, the work is typical of late fourteenth-century English carving, but its subject matter is unusual. Depictions of the Virgin being instructed by her mother are common, but it is extremely rare to find both parents represented; only one other example, in the Museo Arqueologico Nacional, Madrid, has been recorded.

This piece is an English sculpture from the early 15th century. Specifically, itâs a Nottingham alabaster, so called because itâs made from alabaster quarried around Nottingham in the Midlands of England. The material was readily available in that region. The resulting sculptures were remarkably popular in the British Isles, Ireland and Europe, making them economically significant for the Nottingham region. Nottingham alabasters were important export objects in the late 14th century through about the middle of the 15th century.

Typically, they would have been painted and gilded. Often, in surviving objects, the polychromy has worn off to varying degrees. This piece appears to be a panel from a multi-panel rentable/altarpiece. These were popular c. 1380-1460. They arere mentioned fairly often in payment documents and inventory records in the late Middle Ages.
Bibliography
Ulrich Middeldorf, Sculptures from the Samuel H. Kress Collection: European Schools XIV-XIX Centuries (London: Paidon Press, 1976), 119 and plate 199.
Francis Cheetham, Alabaster Images of Medieval England (Rochester: Boydell and Brewer, Inc., 2003), figure 10 (illustrated).
Related Objects
A box of Xrays of the Kress Collection is on Shelf G in the Vault (6/5/2018).
Provenance
Donated by the Kress Foundation to Pomona College in 1961.
Keywords Click a term to view the records with the same keyword
This object has the following keywords:
Christian Saints, Kress, Parent and Child, Scholars, Virgin Mary
Exhibition List
This object was included in the following exhibitions:
Dimensions
Portfolio List Click a portfolio name to view all the objects in that portfolio
This object is a member of the following portfolios:

Your current search criteria is: Portfolio is "Kress Collection".