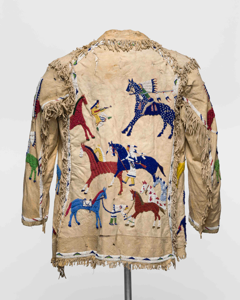 Although figurative designs in Plains beadwork are uncommon, they are sometimes found on clothing, as in this man's jacket, which represents a shift in artistic practice. At the turn of the last century, figurative motifs from painting, as traditionally practiced by men in hide paintings, were taken up by women in beadwork, which previously had been abstract. As in hide painting, the horses here are incompletely rendered in non-naturalistic colors.
The scene that flows around the entire body of the jacket and onto the arms depicts a Sioux raiding party taking horses from a Crow camp. The high value of horses made them an important aspect of social class for Native Americans and horse raiding was not uncommon on the northern and central Plains. The Crow were known for their fine horses, which were targeted in raids by the Sioux, their traditional rivals.
-object commentary from Nuance of Sky: Edgar Heap of Birds Invites Spirit Objects to Join His Art Practice exhibition
Keywords Click a term to view the records with the same keyword
This object has the following keywords:
Beadwork, Horseback riding, Horses, Native Americans, Warriors
Additional Images Click an image to view a larger version

Your current search criteria is: Portfolio is "NASC Outreach 2016" and [Object]Century is "19th c".