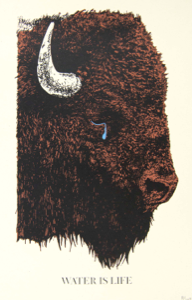 In November and December, during a veteran mobilization in solidarity with the Water Protectors and the Standing Rock Sioux, I had the humbling opportunity to join the Water Protectors and felt the overwhelming spiritual and political power of the historic gathering of Indigenous Nations not seen since before the Battle at the Little Big Horn. I will not forget the sacred fire and this inspirational gathering. I will remember buffalo. I will remember the cry of the water protectors. I will remember water is life. Mni Wiconi.
Keywords Click a term to view the records with the same keyword
This object has the following keywords:
Buffalo, Environmentalism
Dimensions
Portfolio List Click a portfolio name to view all the objects in that portfolio
This object is a member of the following portfolios:

Your current search criteria is: Portfolio is "2017 Acquisitions" and [Object]Nationality is "American" and [Object]Century is "21st c" and [Object]Period is "Contemporary (Post 1945)".