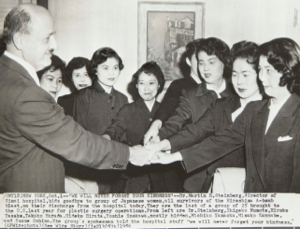 Commentary
âWe Will Never Forget Your KindnessââDr. Martin R. Steinberg, Director of Mount Sinai Hospital, bids goodbye to a group of Japanese women, all survivors of the Hiroshima A-bomb blast, on their discharge from the hospital today. They are the last of a group of 25 brought to the U.S. last year for plastic surgery operations. From left are Dr. Steinberg, Shigeko Numoto, Hiroke Tasake, Takako Harada, Hideko Hirata, Yoshie Enokawa, mostly hidden, Michiko Yamaoka, Misako Kannabe, and Suzue Oshima. The group's spokesman told the hospital staff âwe will never forget your kindnessâ, New York, October 1, 1956. NB: The Hiroshima Maidens are a group of 25 Japanese women who were school-age girls when they were seriously disfigured as a result of the thermal flash of the fission bomb dropped on Hiroshima on the morning of August 6, 1945. They subsequently went on a highly-publicized journey to get reconstructive surgery in the U.S. in 1955. Keloid scars from their burns marred their faces, and many of their hand burns healed into bent claw-like positions. These women, as well as the other citizens affected by the A-bomb, were referred to as hibakusha, meaning "explosion-affected people". By 1951, Hiroshima bomb survivor Shigeko Niimoto had endured several unsuccessful Japanese operations to repair scarring on her face. Following a Christian church meeting with Reverend Kiyoshi Tanimoto, he invited her to a meeting of bomb-affected people. Upon arriving and finding the meeting's discussion too political for her tastes, Niimoto suggested to Rev. Tanimoto that they form a support group for the dozen or so young women who he knew with similar injuries and concerns. Soon they were meeting regularly in the basement of his church. The women had all experienced similar lives following the war, such as being hidden from view by parents, stared at when they ventured outside, unwanted by employers, and rejected as potential wives for fear they were genetically damaged. As Tanimoto had gained some fame in America as a subject of a celebrated 1946 magazine/book article by journalist John Hersey titled "Hiroshima", Tanimoto joined American journalists to create a charitable foundation to help victims of Hiroshima and "explore the ways of peace". Hersey, Pearl S. Buck, Norman Cousins and Reverend Marvin Green were Tanimoto's partners in the Hiroshima Peace Centre Foundation. The group of scarred women was one of the foundation's projects, with Tanimoto calling it the Society of Keloid Girls. Following the help from newspaper columnist Shizue Masugi, Tanimoto began raising funds to get plastic surgery for his group. Newspapers dubbed them genbaku otome, or "atomic bomb maidens", and in 1952 about 20 of them were treated in Tokyo and Osaka. Plastic surgery in Japan was not as advanced as it was in the United States, so Tanimoto tried to find a way to get the "maidens" to America. Once aware of his efforts, Saturday Review editor Norman Cousins pledged to help Tanimoto. They found two doctors, William Maxwell Hitzig and Arthur Barsky of Mount Sinai Hospital, New York, who were willing to supervise the medical operations, and on May 5, 1955, a group of 25 women in their teens and twenties departed for America. The more specific nickname for the group â the Hiroshima Maidens â caught on when the women were brought to Mount Sinai Hospital, New York to undergo multiple reconstructive surgeries. This highly-publicized turn of events was largely the work of Cousins, an outspoken advocate of nuclear disarmament.
Bibliography
Illustrated: Associated Press ID # 984301172489.
Materials
Wire photographs were originally transmitted over phonelines, then later, by satellite. They were first used in the early 1920s. Associated Press became a leader with this. After pigment touch-ups, etc., the print is put into a drum (like a drum scanner). The image gets converted into audio tones that are transmitted. The tones are received and beamed onto photo-sensitive paper. Wire photographs are copies without originals---they are hybrid, transmitted objects. (Britt Salvesen, Curator and Department Head, Photography Department, Los Angeles County Museum of Art, March 30-31, 2022)
Keywords Click a term to view the records with the same keyword
This object has the following keywords:
Arthur Barsky, Casualties, Civilians, Healing, Hideko Hirata, Hiroke Tasake, Hiroshima bombing, Hiroshima Maidens, Hiroshima Peace Centre Foundation, Injury, Japan, Martin R. Steinberg, Michiko Yamaoka, Misako Kannabe, Mount Sinai, New York City, Pacific Theater, Reconstructive surgery, Reverend Kiyoshi Tanimoto, Shigeko Numoto, Suffering, Survival, Suzue Oshima, Takako Harada, Therapy, United States, William Maxwell Hitzig, World War II, Yoshie Enokawa
Additional Images Click an image to view a larger version