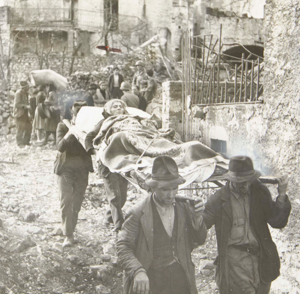 Commentary
Scene of many days of bitter fighting, the tiny mountain town of Lagone, Italy fell to warriors of Lt. General Mark Clarkâs U.S. Fifth Army. The smoke of battle had hardly cleared before hundreds of residents flocked down from the hills to return to their homes. The pathos of their tragic homecoming to the wrecked, blasted buildings is recorded in this series. These men, women and children are all non-combatants. They find that war is a very personal experience---an experience that has left them with a deep, grim hatred of the Germans. Members of her family carry an old woman down from the hills on a crude stretcher. The womanâs face mirrors the agony that the bumpy journey causes her, January 1944.
Technique
Ferrotyped prints are processed in such a way that they are shiny. The print has a sensitive surface, usually thinner, because it was put through a press while still wet.
Materials
Ferrotyped prints have a sensitive surface, usually shiny and thinner, because they are put through a press while still wet. Ferrotyping makes the surface of the photograph smoother. Light does not scatter as much on a smoother surface, so this increases contrast. That makes ferrotyped images better for press photography.
Keywords Click a term to view the records with the same keyword
This object has the following keywords:
Civilians, Elderly Portraits, European Theater, Families, Germany, Lagone, Mark Clark, Mountain Villages, Old Age, Repatriation, Rubble, Stretchers, U.S. Fifth Army, World War II
Additional Images Click an image to view a larger version

Your current search criteria is: Keyword is "BDB".