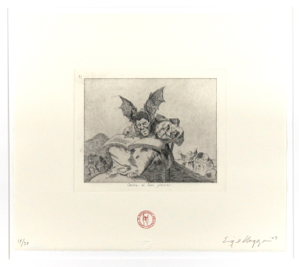 Commentary
Enrique Chagoya began Homage to Goya twenty years ago in his studio but was forced to stop before the suite could be completed. Recently, Chagoya revisited the suite of prints in collaboration with Segura Publishing Company and re-aquatinted the plates, resulting in Homage to Goya II. This suite of etchings was printed by Master Printer Jill Lerner on Rives Heavyweight paper, with finish work by Segura Studio Manager Peter Venti in an edition of 30.

Your current search criteria is: Keyword is "CBE:BWF:DCE:EAC:EAX".