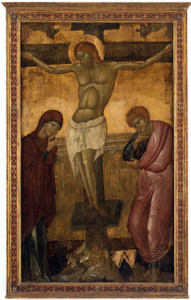 Commentary
The grief-stricken figures of Mary and Saint John flank the figure of Christ in this Crucifixion scene. With her anguished gaze directed downward, the Mourning Virgin holds one hand to her cheek and, with the other, gestures toward her son. Saint John also gestures toward Christ, but he appears more pensive; one hand on his chin, his gaze meets that of the viewer, encouraging us to observe this tragic moment. The background is divided horizontally, the lower half resembling a wall, the upper half, sky. In the upper reaches of the panel, above the arms of the cross, two weeping angels reflect upon the scene, heightening the impact of the image.

This 14th-century panel blends characteristics of both Italian and Byzantine traditions. While the angels are Italianate in style, the gold ground, flattened space, and stylized figures are common to Byzantine art, which flourished in Venice at the time. Although the identity of this artist is unknown, it is likely that he was Venetian.
Provenance
Gift from Kress to the Metropolitan Museum, 1932. Returned from the Metropolitan, 1961.
Gift of the Kress Collection (#K112) in 1961.
Related Objects
A box of Xrays of the Kress Collection is on Shelf G in the Vault (6/5/2018).
Keywords Click a term to view the records with the same keyword
This object has the following keywords:
Angels, Christ, Crucifixion, Grief, Jesus Christ, Kress, Mourning, Sadness, Saint John the Apostle, Saint John the Evangelist, Suffering, Virgin Mary
Additional Images Click an image to view a larger version

Your current search criteria is: Keyword is "CBE:BWF:EZ:FA".