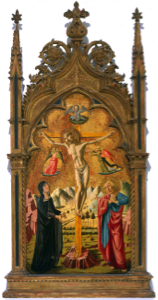 Commentary
Images of the Crucifixion follow a common pattern, presenting Christ on the cross in the center, the mourning figures of mother Mary to the left, and Saint John the Evangelist to the right. This composition, though typical in composition, amplifies the sense of tragedy by the use of exaggerated gestures and bodily deformation. Christ's gaunt, elongated arms, sunken eyes, and shallow chest all emphisize the unspeakable physical abuse that he has endured. The anguished Saint John clasps his hands together in despair, his elbows raised almost to the level of his shoulders. The Mourning Virgin offers an interesting contrast to the figure of Saint John. She appears to be too exhausted by her ordeal for emphatic gestures; her arms are extended before her, but her hands hang almost limp. Her oversized eyes are full of sorrow as she looks upward, powerless to help her dying Son. In the lower half of the background, a town is visible in the distance, nestled among the hills.

The nest of birds atop Christ's cross is a symbolic reminder of the magnitude of His sacrifice. Just as Christ's blood was spilled to save humanity, the adult pelican pierces its breast to nourish its young with its own blood. While many elements here suggest Christ's humanity and the physical facts of His sacrifice. others remind us of His divinity. He is attended by two heavenly angels, and the sky behind him is a lavish gold, the color of kings.
Bibliography
Berenson, 'Pitture Italiane del Rinasciment,' p. 337.
Berenson, 'Italian Pictures of the Renasisance, 1932, p. 393
L. Venturi, 'Italian paintings in ...ica, 1933, V. II, plate 316
F.M. Perkins, '...egna d'arte,' 1911, p 14
Gnoli, 'Pittori e minitori..' Umbria,' p. 215
National Gallery of Art, 'Pre-...nary Catalogue of Paintings and Sculpture, 1941,' p. 41.
Attribution
Attributed to Niccolo by L. Venturi, ..i, Perkins (first manner), Berenson (studio). date c. 1470 in Cat. NGA, 1941 on the basis of ..larity to Karlsruhe Crucifixion, signed and d 1468.
Materials
Egg tempera
Provenance
Platt Collection, Englewood, New Jersey
Kress Collection (K1284), 1939
National Gallery of Art, Washington (Kress Loan) 1941
Gift of the Kress Foundation, 1961.
Related Objects
A box of Xrays of the Kress Collection is on Shelf G in the Vault (6/5/2018).
Keywords Click a term to view the records with the same keyword
This object has the following keywords:
Angels, Christ, Crucifixion, Grief, Jesus Christ, Kress, Mourning, Sadness, Saint John the Apostle, Saint John the Evangelist, Virgin Mary
Additional Images Click an image to view a larger version

Your current search criteria is: Keyword is "CBE:BWF:EZ:FE:HQ".