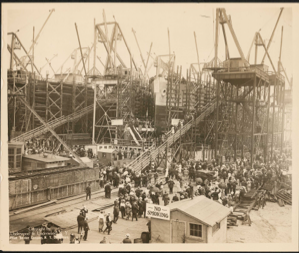 
Hog Island Shipyard shattered shipbuilding world records when five 7800-ton cargo vessels were launched in 48 minutes. The steamer Lurpalile is about to slide into the Delaware River in Philadelphia., May 1919
Vintage ferrotyped gelatin silver print on paper

Provenance
Purchased by the Benton Museum of Art at Pomona College on August 12, 2020 from Edwynn Houk Gallery, New York.
Commentary
Five Steel Vessels Launched in 48 Minutes! The Hog Island Shipyard shattered all shipbuilding world records when five 7800-ton steel cargo vessels were launched in 48 minutes. This is a general view of the launching, with the steamer âLurpalileâ about to slide into the Delaware River in Philadelphia.