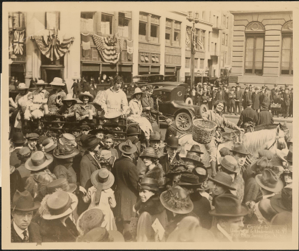 Provenance
Purchased by the Benton Museum of Art at Pomona College on August 12, 2020 from Edwynn Houk Gallery, New York.
Commentary
1000 Farmerettes Invade New York! About a thousand farmerettes, dressed in smocks, bloomers, puttees and large straw hats, invaded Fifth Avenue to launch a campaign for funds. They are a part of the Woman's Land Army that will work on farms this summer. They made a great hit -- especially with the men, New York City.

During World War I, Britain created the Womenâs Land Army, through which young women worked on farms in order to support the changing needs of the countryâs agricultural sector. Taking their cue from the British Land Army, some womenâs universities in the United States began training women to work the land in order to support the agricultural needs of the country. Chief among these institutions were Vassar, Mount Holyoke, and Bryn Mawr Colleges. The Womenâs Land Army of America was set up in forty states and the District of Columbia. Historians estimate between 15,000 and 20,000 women took part in the WLAA across the country. Although President Woodrow Wilson lent his support to the organization in 1918, the government did not grant the WLAA any federal funding. The money needed to run the national headquarters in New York City and the subsidiary state branches of the group were financially supported by private contributions, many given by womenâs organizations. â National Womenâs History Museum, âWomenâs Land Army of World War Iâ.
Marks
Credited in plate with typeset credit and title on label affixed to verso.
Keywords Click a term to view the records with the same keyword
This object has the following keywords:
5th Avenue, Farmers, Female Figures, Fifth Avenue, Fundraisers, Women's Land Army of America, World War 1, World War I, WW1, WWI
Additional Images Click an image to view a larger version