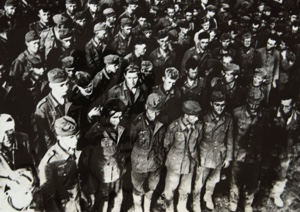 Taken prisoner on the Russian Front, these Nazis donât look too unhappy about being out of the war, February 1944
Vintage ferrotyped gelatin silver print on paper

Related Objects
P2019.21.942 and P2019.21.943 were both assigned the collector number WW2USSR-085. They are two different photographs.
Commentary
Taken prisoner on the Russian Front, these Nazis donât look too unhappy about being out of the war. All weary, most of them ill-clad, and some wounded, the Germans huddle together as they wait to be transported to a prisoner-of-war camp, February 1944.
Technique
Ferrotyped prints are processed in such a way that they are shiny. The print has a sensitive surface, usually thinner, because it was put through a press while still wet.
Materials
Ferrotyped prints have a sensitive surface, usually shiny and thinner, because they are put through a press while still wet. Ferrotyping makes the surface of the photograph smoother. Light does not scatter as much on a smoother surface, so this increases contrast. That makes ferrotyped images better for press photography.
Keywords Click a term to view the records with the same keyword
This object has the following keywords:
Eastern Front, European Theater, Germany, Prisoners of War, Soldiers, Soviet Union, World War II
Additional Images Click an image to view a larger version