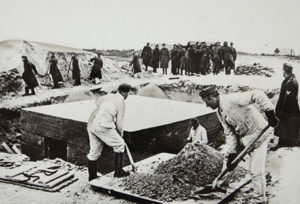 Commentary
German soldiers build concrete blockhouses for their sentries on the Russian Front. Blockhouses are sunk in the ground and covered with earth. At the same time that German boast of their planes' spring offensive, the Nazis seem to be taking great care preparing defensive measures, June 1942.
Technique
Ferrotyped prints are processed in such a way that they are shiny. The print has a sensitive surface, usually thinner, because it was put through a press while still wet.
Materials
Ferrotyped prints have a sensitive surface, usually shiny and thinner, because they are put through a press while still wet. Ferrotyping makes the surface of the photograph smoother. Light does not scatter as much on a smoother surface, so this increases contrast. That makes ferrotyped images better for press photography.
Keywords Click a term to view the records with the same keyword
This object has the following keywords:
Blockhouses, Blockhouses, Construction, Eastern Front, European Theater, Sentries, Snow, Soldiers, Soviet Union, Wehrmacht, Winter, World War II
Additional Images Click an image to view a larger version