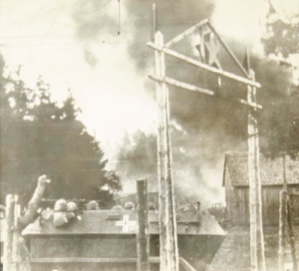 A bizarre war car bearing an identifying German cross rolls toward a gate topped by the Russian red star. It is entering a flaming village on the Russo-German front., June 1941
Vintage wire photograph on paper

Commentary
A bizarre war car, lower left, driven by steel-helmeted heads of soldiers rolls toward a gate topped by the Russian red star. The car bears an identifying German cross. It is entering a flaming village on the Russo-German front, June 1941.
Materials
Wire photographs were originally transmitted over phonelines, then later, by satellite. They were first used in the early 1920s. Associated Press became a leader with this. After pigment touch-ups, etc., the print is put into a drum (like a drum scanner). The image gets converted into audio tones that are transmitted. The tones are received and beamed onto photo-sensitive paper. Wire photographs are copies without originals---they are hybrid, transmitted objects. (Britt Salvesen, Curator and Department Head, Photography Department, Los Angeles County Museum of Art, March 30-31, 2022)
Keywords Click a term to view the records with the same keyword
This object has the following keywords:
Eastern Front, European Theater, Fires, Germany, Military Vehicles, Soviet Union, Villages, World War II
Additional Images Click an image to view a larger version