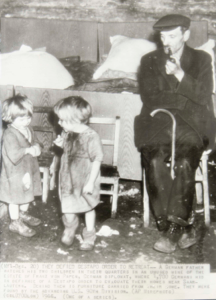 Commentary
They defied Gestapo order to retreat: A German father watches his two children in their quarters in an unused mine on the estate of Franz von Papen, German diplomat. 1,700 Germans hid there in defiance of Gestapo order to evacuate their homes near Saarlautern. Behind them is furniture carried from their home. They were found by the advancing U.S. 90th Division, December 1944.
Dimensions
Sheet: 10 7/16 x 7 9/16
Materials
Wire photographs were originally transmitted over phonelines, then later, by satellite. They were first used in the early 1920s. Associated Press became a leader with this. After pigment touch-ups, etc., the print is put into a drum (like a drum scanner). The image gets converted into audio tones that are transmitted. The tones are received and beamed onto photo-sensitive paper. Wire photographs are copies without originals---they are hybrid, transmitted objects. (Britt Salvesen, Curator and Department Head, Photography Department, Los Angeles County Museum of Art, March 30-31, 2022)
Keywords Click a term to view the records with the same keyword
This object has the following keywords:
Child Figures, Civilians, European Theater, Families, Franz von Papen, Gestapo, Mines, Parent and Child, Saarlautern, Suffering, U.S. 90th Infantry, World War II
Dimensions
Portfolio List Click a portfolio name to view all the objects in that portfolio
This object is a member of the following portfolios:

Your current search criteria is: Keyword is "CSW".