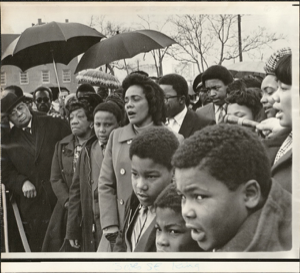 Commentary
Memorial Ceremony Held on King's Birthday: Mrs. Coretta King, center, stands with members of her family in Atlanta as she sings the Civil Rights song "We Shall Overcome" after laying a wreath at the crypt of her slain husband, Dr. Martin Luther King, Jr.. At left, with hat, is the Reverend Martin Luther King Sr. and his wife. Next to Coretta Scott King at right are son Dexter King and daughter Yolanda King. At left stands her oldest son, Martin Luther King III.

Your current search criteria is: Keyword is "CTB".