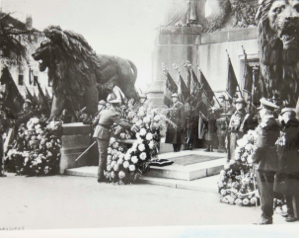 Bibliography
St. Paul Sunday Pioneer Press, November 11, 1945, p. 2.
Commentary
Made before World War II, this photo shows King Leopold of Belgium placing a wreath on the tomb of Belgiumâs unknown soldier in Brussels, during an Armistice Day observance. Since then, Belgium suffered a second invasion by the Germans. Leopold is virtually an exile from his country because of the part some of his subjects believe he played during the invasion.
Dimensions
Sheet: 7 1/8 x 9
Technique
Ferrotyped prints are processed in such a way that they are shiny. The print has a sensitive surface, usually thinner, because it was put through a press while still wet.
Materials
Ferrotyped prints have a sensitive surface, usually shiny and thinner, because they are put through a press while still wet. Ferrotyping makes the surface of the photograph smoother. Light does not scatter as much on a smoother surface, so this increases contrast. That makes ferrotyped images better for press photography.
Keywords Click a term to view the records with the same keyword
This object has the following keywords:
Armistices, Brussels, European Theater, King Leopold, King Leopold, Lions, Soldiers, Tombs, Unknown soldier memorials, Unknown soldiers, World War II
Additional Images Click an image to view a larger version

Your current search criteria is: Keyword is "CTB".