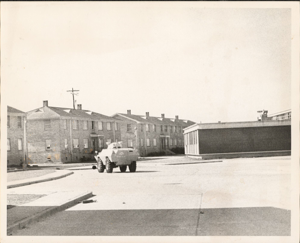 Commentary
Desire Projects were public housing facilities located in the Ninth Ward of New Orleans, Louisiana. The projects were meant to serve the large number of underprivileged black residents in the New Orleans area, but the overall conditions there were deplorable from the moment they opened in the late 1950s. Located in a cypress swamp and dumping ground, Desire was bordered by railroad tracks, the Mississippi River, the Industrial Canal and a corridor of industrial plants. It was known as the poorest housing development in New Orleans. Desire soon became a place of despair, with many residents overwhelmed with problems and with little or no help from the government.

The Black Panthers set up a New Orleans chapter in 1970 by establishing themselves in the Desire projects; the chapter lasted for about three months. It consisted of men and women who created several programs to help the residents. The programs included free breakfasts that helped feed over 100,000 children, free clothing, and donations from merchants. The programs helped establish self-respect, self-discipline, community responsibility and authority, and fundraising and organizing efforts. They asserted self-defense against attacks by police, goons, dogs, and spies. The relationship between the Panthers and the residents of Desire grew strong. After three-months of this positive relationship, the residentsâ demands became Panther demands. Residents reciprocated this support, placing themselves between police and Panther headquarters during a raid in November 1970. Many residents were arrested.

Additional confrontations took place between the Black Panther Party and authorities in the Desire projects. One episode was known as the Thirty-Minute War. It occurred after several months of police infiltration into the Panthers. Police cruisers, along with buses and reporters, made their way to Desire on September 15, 1970 around 8:30 am. Hundreds of officers from local, state, and federal authorities arrived at the headquarters of the Black Panthers on Piety Street. About fifteen minutes later, machine gun and automatic weapon fire aimed at the Panther headquarters was heard. Remarkably, there was no bloodshed on either side. The Panthers surrendered. Thirteen people---ranging in age from 14 to 27---were arrested and taken to New Orleans Parish Prison. Each had a $100,000 bond set. Several days after the incident, some Panthers returned to headquarters and reopened. By late October, headquarters was moved to apartment #3315 in Desire. As weeks passed, tensions began to escalate between Panthers and police again. On November 17, 1970, police returned to Desire to permanently evict the Panthers. When they arrived, police were confronted with residents throwing objects at them. At around 11:45 pm, a tank began advancing towards the headquarters building, and members of the community filled the street in a standoff with authorities. Desire leaders had to restrain them from trying to make any advance. Five people were shot, but no deaths resulted in this second confrontation.
Marks
On verso: artist's credit stamp, manuscript title, date stamp, and newspaper stamp.
Provenance
Donated to the Benton Museum of Art at Pomona College by Eric Alterman on December 16, 2021.
Dimensions
Sheet: 7 15/16 x 9 7/8
Keywords Click a term to view the records with the same keyword
This object has the following keywords:
Armored vehicles, Black Panthers, Civil Rights Movements, Desire Housing Project, Housing, Injustice, New Orleans, Parking Lots, Police, Poverty, Racial Discrimination, SWAT
Additional Images Click an image to view a larger version

Your current search criteria is: Keyword is "DAQ".