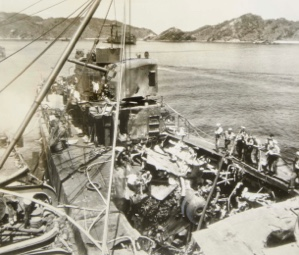 Bibliography
Illustrated: Associated Press ID #450709092.
Commentary
A gaping hole in the aft fireroom of the USS Newcomb, after the destroyer was attacked by seven Japanese suicide planes off the coast of Southern Japan, July 1945. The ship was hit four times by the kamikazes, which made her a blazing inferno and knocked out her steam and electric power. The 2,100-ton veteran of Pacific campaigning made her way to an advance base anchorage under her own power, although she suffered 91 casualties.
Dimensions
Sheet: 8 1/16 x 9 5/16
Materials
Wire photographs were originally transmitted over phonelines, then later, by satellite. They were first used in the early 1920s. Associated Press became a leader with this. After pigment touch-ups, etc., the print is put into a drum (like a drum scanner). The image gets converted into audio tones that are transmitted. The tones are received and beamed onto photo-sensitive paper. Wire photographs are copies without originals---they are hybrid, transmitted objects. (Britt Salvesen, Curator and Department Head, Photography Department, Los Angeles County Museum of Art, March 30-31, 2022)
Keywords Click a term to view the records with the same keyword
This object has the following keywords:
Aerial bombardments, Fires, Japan, Japan, Kamikaze, Kamikaze, Pacific Theater, United States Navy, United States Navy, USS Newcomb, World War II, Wreckage
Additional Images Click an image to view a larger version

Your current search criteria is: Keyword is "DDC" and [Object]Nationality is ".