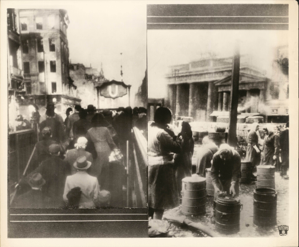 
At left, residents of Berlin file out of an underground bomb shelter. At right, bombed-out German housewives in Berlin seek food for their families., 1940-1945
Vintage ferrotyped gelatin silver print on paper

Provenance
Purchased by the Benton Museum of Art at Pomona College on August 12, 2020 from Edwynn Houk Gallery, New York.
Commentary
Photos from Bombed Berlin: At left, a photo radioed to New York from Stockholm shows residents of Berlin filing out of an underground bomb shelter. They find that the buildings lining the streets in front of them are gutted by bombs dropped by Allied planes. At right, bombed-out German housewives in Berlin seek food for their families in metal containers set there for that purpose.

Berlin, the capital of Nazi Germany, was subject to 363 air raids during the Second World War. It was bombed by the RAF Bomber Command between 1940 and 1945, by the USAAF Eighth Air Force between 1943 and 1945, and by the French Air Force between 1944 and 1945 as part of the Allied campaign of strategic bombing of Germany. Berlin was also attacked by aircraft of the Red Air Force, in particular in 1945, as Soviet forces closed on the city. British bombers dropped 45,517 tons of bombs, while American aircraft dropped 23,000 tons. As the bombings continued, more and more people fled the city. By May 1945, 1.7 million people (40% of the population) had fled.
Technique
Ferrotyped prints are processed in such a way that they are shiny. The print has a sensitive surface, usually thinner, because it was put through a press while still wet.
Marks
On recto: Label in bottom right corner, "DISPATCH / PHOTO NEWS / SERVICE / INC. / NEW YORK".

On verso: Typewritten label attached in center, "PHOTOS FROM BOMBED BERLIN / Left - Photo radioed to New York from Stockholm, shows Berlin residents filing out of an underground / bomb shelter to find that the buildings lining the streets in front of them are gutted by bombs dropped / by the Allied bombing planes. Right - Bombed-out German housewives in Berlin seeking food for their / families in metal containers set there for that purpose. Produced Exclusively by Dispatch Photo News Service, New York City". Handwritten in graphite in top left corner, "DP-WW2-018".
Materials
Ferrotyped prints have a sensitive surface, usually shiny and thinner, because they are put through a press while still wet. Ferrotyping makes the surface of the photograph smoother. Light does not scatter as much on a smoother surface, so this increases contrast. That makes ferrotyped images better for press photography.
Keywords Click a term to view the records with the same keyword
This object has the following keywords:
Air raids, Allied Forces, Berlin, Bomb Shelters, Civilians, European Theater, Food, Germany, Rubble, Starvation, Street Scenes, Suffering, World War II
Additional Images Click an image to view a larger version