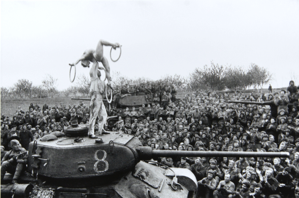 Edition
The portfolio is published in 2003 in an edition of twenty-eight, numbered 1 through 28, and seven artistâs proofs, numbered I through VII. It contains twenty original photographs on 16 x 20 inch double weight Ilford multigrade fiber paper, hand-printed from my fatherâs original negatives and stamped and editioned on the versos. The Dmitri Baltermants Collection, LLC retains the copyright to all Baltermants photographs. No reproduction rights are acquired by the purchase of this Portfolio. The prints have been archivally processed, and the Portfolio has been produced with attention to archival quality. This Portfolio is numbered 3/28
Commentary
Introduction for PORTFOLIO I and II Official photographer to the Kremlin and picture editor of the popular news and travel magazine Ogonyok, Dmitri Baltermants (1912-1990) was the premier photojournalist in the Soviet Union for five decades. As a young child, Baltermants witnessed the tumultuous changes brought about by the 1917 Revolution and grew up in the chaotic political environment dictated by Leninâs ideologies. Born into the intelligentsia, Baltermants and his family were stripped of their status â his father, an officer for the Tsarâs army, exiled to forced labor and his mother resigned to work as a typist. Baltermantsâs interest in photography was sparked by an apprenticeship with the official newspaper Isvestiya. In 1939 he graduated from Moscow State University, anticipating a quiet life as a mathematics teacher at a military academy. But the rapidly spiraling world had other plans for him; Isvestiya assigned him to western Ukraine to document the Soviet-German partitioning of Poland and Ukraine under the secret Molotov-Ribbentrop Pact, and he was launched as a professional photojournalist. In 1941 the Pact melted down, and Baltermants was faced with the monumental task of documenting The Great Patriotic War (World War II). Baltermants regularly journeyed to the front â initially only 20 kilometers from Moscow â and found the horrors of war staring back through his lens. In 1942 an editor mistakenly published with an egregiously incorrect caption one of Baltermantsâs images of German POWs. Baltermants was made a scapegoat, stripped of his captainâs rank, posted to a âpenalty battalion,â and sent equipped with a rifle, two grenades, and a flask of vodka to the most brutal front: Stalingrad. In late 1943, after recovering from near-crippling leg injuries sustained in Stalingrad, he took camera in hand again, and continued gathering memorable images for the army newspaper Na Razgrom Vraga (âTo Destroy the Enemyâ). He followed the advance of the Red army in Ukraine and Poland, from Poland across Oder River into Germany, and ultimately into Berlin itself which the Allied Powers conquered, divided and occupied in 1945. World War II was finally over â though a new conflict, the Cold War, was to dominate the international landscape for the next 45 years, and Baltermants would continue to play a leading photojournalistic role, up to and included the Reagan-Gorbachev summit meetings. It goes without saying that at the time they were taken, Baltermantsâs war photographs were ruthlessly edited by the Soviet censorship board who published only those images which boosted national morale and encourages ultimate Soviet victory. His most moving images were suppressed and were only first exhibited and published in the more open 1960s. Chief among these censored images were the documentation of the Nazi massacre of thousands of men, women and children in the Crimean village of Kerch in Winter 1942. Baltermants searingly captured the overpowering day of grief as the village women searched for the bodies of their loved ones in the killing fields. At other times, his camera captured the day-to-day moments in a soldierâs life, sometimes seemingly peaceful, sometimes jarringly surreal. In all, over 20 million Soviets lost their lives in the Great Patriotic War. More than just documents, Dmitri Baltermantsâs images from this period have become universal symbols for the tragedy and incomprehensibility of war. Like Picassoâs Guernica, they rise to the level of great art. Sadly, they have become timely and relevant once again.
Keywords Click a term to view the records with the same keyword
This object has the following keywords:
Acrobats, Berlin, Eastern Front, Entertainment Events, Invasion of Germany, Marching, Red Army, Red Army, Soldiers, Soviet, Soviet Union, Tanks
Additional Images Click an image to view a larger version
Dimensions
Portfolio List Click a portfolio name to view all the objects in that portfolio
This object is a member of the following portfolios: