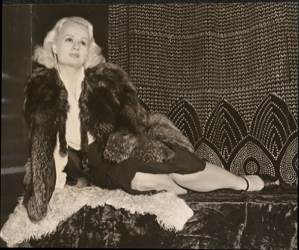 Commentary
Edith Rogers Dahl at the theater where she was appearing today, after receiving word that her husband has been released. Her husband, Harold E. Dahl of Champaign, Illinois, is the flier who has been a prisoner in Spain since he parachuted to earth behind Generalissimo Francisco Francoâs lines on July 12, 1937. Blonde and 35, Mrs. Dahl said, âIâll wait until it is verified before I get excited.â The couple had been married only six months when Mr. Dahl went to fly for the Loyalists. Mrs. Dahl has made a number of efforts to have him freed, once sending a picture of herself to France. Police in Los Angeles said that Dahl will face trial as a check forger when he returns to the United States, as sources show him to be involved in seven cases of issuing allegedly-worthless checks, February 1940.
Technique
Ferrotyped prints are processed in such a way that they are shiny. The print has a sensitive surface, usually thinner, because it was put through a press while still wet.
Materials
Ferrotyped prints have a sensitive surface, usually shiny and thinner, because they are put through a press while still wet. Ferrotyping makes the surface of the photograph smoother. Light does not scatter as much on a smoother surface, so this increases contrast. That makes ferrotyped images better for press photography.
Keywords Click a term to view the records with the same keyword
This object has the following keywords:
Champaign, Edith Rogers Dahl, Forgery, Francisco Franco, Harold E. Dahl, Pilots, Prisoners of War, Repatriation, Spain, Spanish Civil War, Theaters, World War II
Additional Images Click an image to view a larger version

Your current search criteria is: Keyword is "DGA".