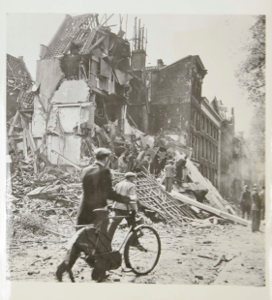 Members of the Holland Voluntary Air Defense in Amsterdam poke through ruins of bomb-wrecked buildings in search of bodies after a Nazi attack, May 1940
Vintage ferrotyped gelatin silver print on paper

Commentary
Members of the Holland Voluntary Air Defense in Amsterdam poke through the ruins of bomb-wrecked buildings in search of bodies. They came with all possible speed after a lightning Nazi attack. The whole of Holland, with the exception of Zeeland, fell before Hitlerâs hordes a few short days after the invasion of the lowlands started, May 1940.
Technique
Ferrotyped prints are processed in such a way that they are shiny. The print has a sensitive surface, usually thinner, because it was put through a press while still wet.
Materials
Ferrotyped prints have a sensitive surface, usually shiny and thinner, because they are put through a press while still wet. Ferrotyping makes the surface of the photograph smoother. Light does not scatter as much on a smoother surface, so this increases contrast. That makes ferrotyped images better for press photography.
Keywords Click a term to view the records with the same keyword
This object has the following keywords:
Aerial bombardments, Amsterdam, Casualties, Civilians, Dutch Voluntary Air Defense, European Theater, Germany, Invasion of Holland, Rubble, Search and rescue, Search and rescue workers, Street Scenes, World War II
Additional Images Click an image to view a larger version

Your current search criteria is: Keyword is "DHZ" and [Object]Period is "Modern (19th century-1945)".