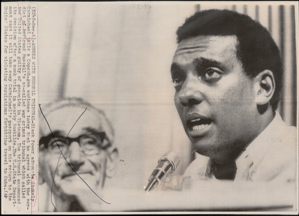 
Stokely Carmichael tells a Copenhagen audience that he agrees with the verdict of Bertrand Russell's so-called war crimes tribunal, which called the U.S. guilty of genocide in Vietnam, December 1, 1975
Vintage wire photograph with applied pigment on paper

Commentary
Agrees With Russell Tribunal: Black Power advocate Stokely Carmichael tells a Copenhagen audience today that he agrees with the verdict of Bertrand Russell's so-called war crimes tribunal, which called the United States guilty of genocide in Vietnam. The tribunal announced its decision after a mock trial in nearby Roskilde. The U.S. State Department says it will take away Carmichael's passport on his return to the United States for violating regulations forbidding travel to Cuba.

Kwame Ture (born Stokely Carmichael, 1941-1998) was a prominent organizer in the Civil Rights Movement in the United States and the global Pan-African movement. Born in Trinidad, he grew up in the United States from the age of 11 and became an activist while attending Howard University. Carmichael eventually developed the Black Power movement, first while leading the Student Nonviolent Coordinating Committee (SNCC), later serving as the Honorary Prime Minister of the Black Panther Party (BPP), and finally as a leader of the All-African People's Revolutionary Party (A-APRP). Carmichael was one of the original SNCC freedom riders of 1961 under Diane Nash's leadership, and he became a major voting rights activist in Mississippi and Alabama after being mentored by Ella Baker and Robert Parris Moses. Like most young people in SNCC, Carmichael became disillusioned with the two-party system after the 1964 Democratic National Convention failed to recognize the Mississippi Freedom Democratic Party as official delegates from the state. He chose to develop independent black political organizations, such as the Lowndes County Freedom Organization and, for a time, the national Black Panther Party. Inspired by Malcolm X's example, Carmichael articulated a philosophy of "black power" and popularized it both by provocative speeches and more sober writings. Carmichael became one of the most popular and controversial Black leaders of the late 1960s. J. Edgar Hoover, director of the FBI, secretly identified him as the man most likely to succeed Malcolm X as America's "black messiah." The FBI targeted Carmichael for personal destruction through its COINTELPRO program, and he fled to Africa in 1968. He re-established himself in Ghana, and then Guinea by 1969, where he adopted the new name of Kwame Ture.
Marks
On recto: typewritten title and date.
On verso: date stamps.
Materials
Wire photographs were originally transmitted over phonelines, then later, by satellite. They were first used in the early 1920s. Associated Press became a leader with this. After pigment touch-ups, etc., the print is put into a drum (like a drum scanner). The image gets converted into audio tones that are transmitted. The tones are received and beamed onto photo-sensitive paper. Wire photographs are copies without originals---they are hybrid, transmitted objects. (Britt Salvesen, Curator and Department Head, Photography Department, Los Angeles County Museum of Art, March 30-31, 2022)
Keywords Click a term to view the records with the same keyword
This object has the following keywords:
Bertrand Russell, Civil Rights Movements, Copenhagen, Genocide, Injustice, Male Portraits, Racial Discrimination, Stokely Carmichael, United States, Vietnam War, War crimes tribunals
Additional Images Click an image to view a larger version

Your current search criteria is: Keyword is "DJM" and [Object]Nationality is ".