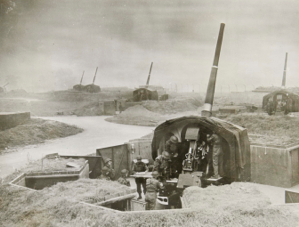 Troops at their positions beside powerful anti-aircraft guns as dusk settles over London, October 1941
Vintage wire photograph on paper

Bibliography
Illustrated: Associated Press ID # 411023182.
Commentary
Troops at their positions beside powerful anti-aircraft guns as dusk settles over the British capital, October 23, 1941. Although nights in London have been peaceful for the past few months, the Anti-Aircraft Command refuses to be lulled into any sense of false security. The capital is encircled with a girdle of these powerful guns, which peer into the skies, ready to pour tons of destruction on enemy war planes, October 1941.
Materials
Wire photographs were originally transmitted over phonelines, then later, by satellite. They were first used in the early 1920s. Associated Press became a leader with this. After pigment touch-ups, etc., the print is put into a drum (like a drum scanner). The image gets converted into audio tones that are transmitted. The tones are received and beamed onto photo-sensitive paper. Wire photographs are copies without originals---they are hybrid, transmitted objects. (Britt Salvesen, Curator and Department Head, Photography Department, Los Angeles County Museum of Art, March 30-31, 2022)
Keywords Click a term to view the records with the same keyword
This object has the following keywords:
Air raids, Antiaircraft Guns, British Anti-Aircraft Command, Dusk, European Theater, Great Britain, London, Soldiers, World War II
Additional Images Click an image to view a larger version

Your current search criteria is: Keyword is "DXV".