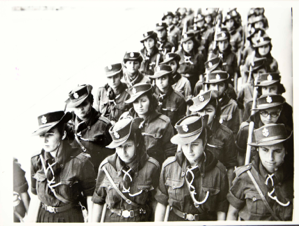 Commentary
If war should come to Turkey, as appears inevitable, that modern nation will find valuable auxiliaries in its women. Modern Turkey is so unlike the Turkey of the First World War. Since the late Ataturk abolished the veil and the harem, Turkish women are now as up-to-date as their Western sisters. Turkey is proud of its women fliers, its Red Cross workers and its women who do manâs work in nearly all fields of endeavor. These Turkish Girl Scouts, hardy and healthy, will be valuable for behind-the-lines work in the event of war, March 1941.
Dimensions
Sheet: 7 x 8 7/8
Technique
Ferrotyped prints are processed in such a way that they are shiny. The print has a sensitive surface, usually thinner, because it was put through a press while still wet.
Materials
Ferrotyped prints have a sensitive surface, usually shiny and thinner, because they are put through a press while still wet. Ferrotyping makes the surface of the photograph smoother. Light does not scatter as much on a smoother surface, so this increases contrast. That makes ferrotyped images better for press photography.
Keywords Click a term to view the records with the same keyword
This object has the following keywords:
Equality, European Theater, Female Figures, Mustafa Kemal AtatÃ¼rk, Turk, Turkey, Turkish Girl Scouts, Women in war, Women's Rights, Women's Rights, World War II
Additional Images Click an image to view a larger version

Your current search criteria is: Keyword is "DZV" and [Object]Period is "Modern (19th century-1945)".