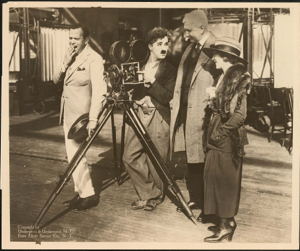 Provenance
Purchased by the Benton Museum of Art at Pomona College on August 12, 2020 from Edwynn Houk Gallery, New York.
Commentary
Notable Group In the Movie World! Charlie Chaplin explains the mysteries of the moving picture camera to Oscar Price, newly-appointed President of the United Artists Corp. in Los Angeles. Charlieâs explanation is so funny, that Douglas Fairbanks and Mary Pickford are laughing at him, Hollywood, California.

United Artists Corporation (UA), currently doing business as United Artists Digital Studios, is an American television digital production company. Founded in 1919 by D. W. Griffith, Charlie Chaplin, Mary Pickford, and Douglas Fairbanks, the studio was premised on allowing actors to control their own interests, rather than being dependent upon commercial studios. UA was repeatedly bought, sold, and restructured over the ensuing century.
Marks
Credited in plate with typeset credit and title on label affixed to verso.
Technique
Ferrotyped prints are processed in such a way that they are shiny. The print has a sensitive surface, usually thinner, because it was put through a press while still wet.
Materials
Ferrotyped prints have a sensitive surface, usually shiny and thinner, because they are put through a press while still wet. Ferrotyping makes the surface of the photograph smoother. Light does not scatter as much on a smoother surface, so this increases contrast. That makes ferrotyped images better for press photography.
Keywords Click a term to view the records with the same keyword
This object has the following keywords:
Cameras, Charlie Chaplin, Charlie Chaplin, Douglas Fairbanks, Douglas Fairbanks, Film Sets, Hollywood, Humor, Mary Pickford, Mary Pickford, Motion Picture Industry, Motion Pictures, Oscar Price, United Artists, World War I
Additional Images Click an image to view a larger version