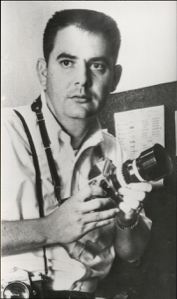 Associated Press staff photographer Jack Thornell (above) was a few yards from James Meredith when Meredith was shot in an ambush as he walked along U.S. 51 near Hernando, Mississippi, June 7, 1966
Vintage wire photograph on paper
6 13/16 x 4 in. (17.3 x 10.16 cm)

Commentary
Photographs Meredith Ambush: Associated Press staff photographer Jack Thornell, above, was only a few yards away from James Meredith on Monday afternoon when Meredith was shot in an ambush as he walked along U.S. 51 near Hernando, Mississippi. Thornell made the photographs that showed Meredith diving to the ground to avoid being struck by the blast, and then grimacing in pain at the side of the road.

James Howard Meredith (born June 25, 1933) is a trailblazer in the Civil Rights movement. In 1962, he became the first black American student admitted to the University of Mississippi, following an intense legal battle in the federal courts. In 1966, Meredith planned a solo 220-mile March Against Fear from Memphis, Tennessee, to Jackson, Mississippi to highlight continuing racism in the South and to encourage voter registration after passage of the Voting Rights Act. On the second day, he was shot by Aubrey James Norvell, a white man, and suffered numerous wounds. Leaders of major organizations vowed to complete the march in his name after he was taken to the hospital. During his recovery, more people from across the country became involved as marchers. Meredith rejoined the march, and when he and other leaders entered Jackson on June 26, they were leading an estimated 15,000 marchers in what was the largest civil rights march in Mississippi.