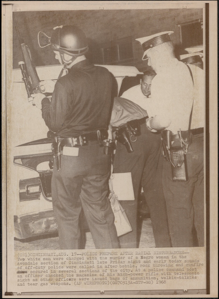 Commentary
Police Prepare After Racial Disturbances: Two white men were charged with the murder of a black woman in the Avondale section of Cincinnati late Friday night. Early today, squads of off-duty police were called in after bottle, rock throwing, and gunfire occurred in several sections of the city. At a police command post, an officer checks the magazine of his high-power rifle with telescopic sigh as other officers are issued bags of ammunition, walkie-talkies and tear gas weapons.
Marks
On recto: typewritten title and date.
On verso: manuscript title, date and date stamp.
Materials
Wire photographs were originally transmitted over phonelines, then later, by satellite. They were first used in the early 1920s. Associated Press became a leader with this. After pigment touch-ups, etc., the print is put into a drum (like a drum scanner). The image gets converted into audio tones that are transmitted. The tones are received and beamed onto photo-sensitive paper. Wire photographs are copies without originals---they are hybrid, transmitted objects. (Britt Salvesen, Curator and Department Head, Photography Department, Los Angeles County Museum of Art, March 30-31, 2022)
Keywords Click a term to view the records with the same keyword
This object has the following keywords:
Ammunition, Avondale, Civil Rights Movements, Injustice, Murder, Police, Racial Discrimination, Rifles, Riots, Street Scenes, Tear Gas
Additional Images Click an image to view a larger version

Your current search criteria is: Keyword is "EHV".